How TUI UK instantly increased passenger notifications from 35,000 to 3.5m with automation

An introduction to TUI UK…

Its airline, TUI Airways, flies to 88 destinations in more than 30 countries and carries in excess of 10 million passengers each year. It also operates six cruise ships, making it the UK’s third-largest cruise line.

TUI UK joined the 15below customer community in 2018; its sister company TUIfly, based in Germany, is one of our longest-standing customers having joined in 2003.

Prior to working with 15below, TUI UK faced significant challenges that affected its everyday operations and restricted the service it was able to offer its customers. These included:

TUI UK realised it needed a complete overhaul of its passenger communications capabilities so it could guarantee best-in-class customer service.

TUI UK adopted a bespoke version of the Flight Status solution from the 15below suite following a complex development phase that ensured its unique requirements were met. Flight Status allows the airline to:

The TUI UK team is the first to use the 15below platform to communicate with on-board crew, ensuring staff members are always the first to know of disruption so they have the necessary information to effectively support passengers.

15below has also integrated Flight Status with TUI UK’s cruise operations to keep passengers, crew and port authorities informed during cases of disruption.

If a flight heading to a cruise departure point is disrupted, notifications are triggered to alert the Port Agent and crew onboard the ship. A bespoke ‘day of the week’ function ensures the relevant Port Agent and Guest Relations Manager are notified depending on who will be on duty when the ship is due to depart.

This allows Port Agents to plan alternative departure times and/or routes to ensure affected passengers reach the ship, while Guest Relations Managers will work to protect the relationship with delayed travellers.

TUI UK’s adoption of Flight Status went live in May 2019. Since then TUI has achieved the following results: 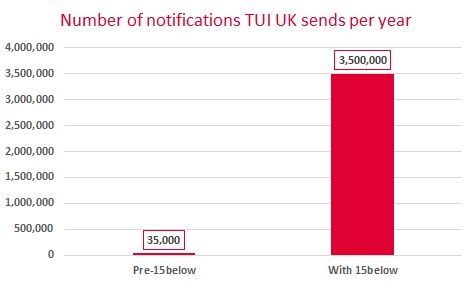 "The 15below platform has enabled TUI UK to modernise its approach to managing a customer experience in delay and irregular situations. From TUI's experience and our customer research, it is not necessarily the delay itself which customers object to but how they are treated and informed during a delay situation.

"The 15below platform has enabled TUI to enhance its communication capability during these situations and ensure all TUI staff who will have a customer interaction during a delay or disruption situation can assist in managing customer expectations and experiences."