Skip to main content
Get in touch
Register for our upcoming IROPS webinar ▶
Version 2.0.0

The day a drone truly put me in my customers’ shoes

After two decades working in travel disruption, you might suspect I’ve seen everything the world can throw at the aviation industry.

From the Icelandic ash cloud to 9/11 and with more strikes, storms, natural disasters and mechanical issues than I care to remember, I’ve certainly been caught up in and helped airlines deal with more than my fair share of incidents. But until last month I’d not seen one of the world’s busiest airports brought to a standstill by a drone.

That was until I found myself in the middle of the well-publicised saga at Gatwick, which saw more than 120,000 people left stranded just days before Christmas and almost 1,000 flights cancelled and many more delayed when a drone was spotted above the airfield.

While this was an incredibly frustrating and stressful situation at the time, it did provide me with a fascinating first-hand experience and conclusive evidence that many of the world’s major airlines are still ill-equipped to deal with unexpected, widespread disruption.

My wife, two young daughters and I had been due to fly to Prague with easyJet at 9am on Thursday 20th December, the morning after drones were first spotted in the area. We were heading to the Czech Republic to stay with family and attend my nephew’s Christmas play.

At this point I should explain that many aspects of easyJet’s service were fantastic. Its app is one of the best on the market and its ground staff performed admirably under immense pressure. But like most airlines, its technical resources were too quickly and easily overwhelmed when disruption struck.

Our day began with a ping from the easyJet app informing us there was already a significant delay to our flight. At least this meant we were aware of the problem before we had even left for the airport. However, we were not asked to delay our arrival.

Upon arrival, it was clear Gatwick was struggling to cope. We were met by a scene of chaos; vast queues leading to every airline desk and ground staff armed only with loudspeakers battling to keep angry passengers informed. 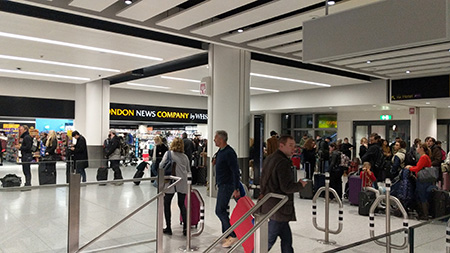 The first wave of flight cancellations was announced (including ours) and we were advised to use the EasyJet app or join one of the seemingly never-ending queues winding around the terminal to speak to a customer service representative. 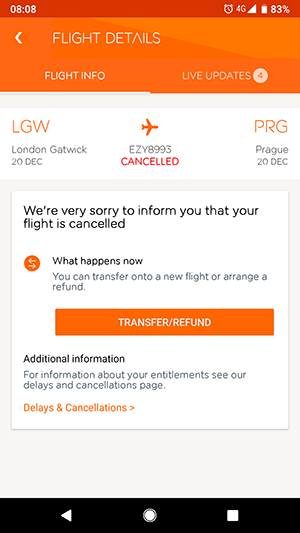 We decided to grab a coffee and see what we could achieve by accessing the app. Despite dozens of attempts, the ‘Manage Your Disruption’ page would not load, no doubt creaking under the weight of tens of thousands of users trying to access it simultaneously. 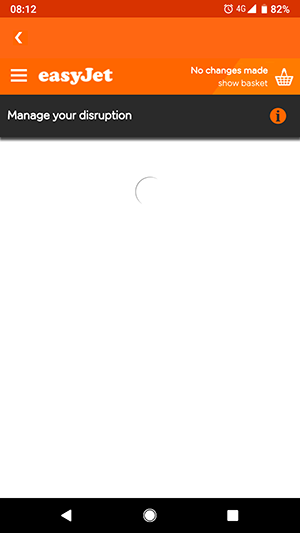 The easyJet app was seemingly rebooted at this point, leading to all flights incorrectly showing as ‘on time’. We decided to search for alternative flights. Had we been made aware of the extent of the issue, we could have started this search hours earlier at home. As it was, we were oblivious to the potential longevity of the drone strike so even considered booking an alternative flight from Gatwick later in the day.

My daughters were becoming tired and upset. They’d been up since 5 am for a trip they’d been excited about and now it looked as though it would have to be cancelled. They’d been looking forward to watching their cousin perform in his school play and seeing relatives for the first time in months. The tears started to flow. 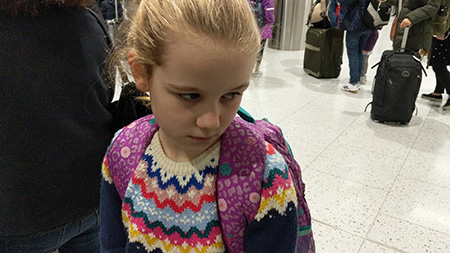 We were finally able to speak to an EasyJet representative who informed us we would be able to apply for a refund for our cancelled flights. This gave us the confidence to book flights from Heathrow with British Airways due to depart later in the day. Of course, it meant we were hundreds of pounds out of pocket, but it was the only option that meant getting to Prague as planned.

Thankfully, we hadn’t checked-in any baggage so were able to leave the terminal, get back in the car and drive to Heathrow. As well as the additional cost of the new flights, we also had to pay for parking at Heathrow while losing the money spent on our stay at Gatwick. But at least there was light at the end of the tunnel after an incredibly stressful morning.

Our EasyJet flight from Gatwick was due to land in Prague, but we were still on the ground at Heathrow. 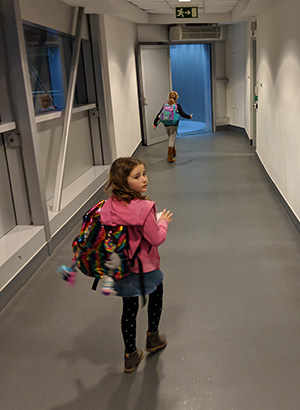 My experience in travel disruption meant we were able to deal with a difficult situation quicker, easier and more effectively than many others. Luckily for us, that allowed us to continue our trip, albeit having lost out on most of the first day of our holiday.

This widespread disruption left tens of thousands of people to self-serve at Gatwick, many of whom were older, travelling with children or simply not tech-savvy enough to make their own alternative arrangements. We helped four other parties comprehend the scale of the disruption they were facing and advised them on what to do next. Who knows how the other tens of thousands of people got to where they needed to be that day, if at all?

So what’s the solution?

In an increasingly competitive travel market, airlines are not judged on the days when their schedule is running smoothly, but on those when they face disruption. Cancellations, delays and diversions are inevitable; a poor response is not.

While the EasyJet staff on the ground did all they could – and remained remarkably professional throughout what must have been a very difficult day for them – the simple fact is that better communication at an earlier stage could have saved thousands of people many hours, huge amounts of money and immense levels of stress.

All airlines operating from Gatwick were aware of the potential risk of a drone grounding flights and could have put systems in place to deal with the fallout should such an incident occur.

This would have stopped us from making a wasted trip to Gatwick, allowed us to book alternative flights and ultimately reached our destination sooner and at less expense. We may even have made it in time for my nephew’s play!

Of course, easyJet or any other airline could do nothing to prevent the drones grounding flights. We were always going to be delayed, cancelled and stranded to some degree.

But with the help of innovative technological solutions to automate their passenger communications, our experience could have been so much smoother and more satisfying. In short, we could have retained full control of our situation, reducing stress and improving our experience. Instead, we felt completely disempowered.

Had airlines at Gatwick been using automated passenger communications on 20th December, all passengers could have been notified of delays and cancellations via their preferred channels so that they had the power to make an informed decision while they were still at home, rather than having to join huge queues around the terminal. They could also have been given details of re-accommodation options including alternative flights and refunds, helping people to make their decisions on whether to stay or leave.

Most passengers are willing to accept disruption as an occasionally inevitable aspect of air travel. How airlines deal with it, however, determines the experience of those passengers, their perception of the company and ultimately whether they will trust that airline with their next holiday.